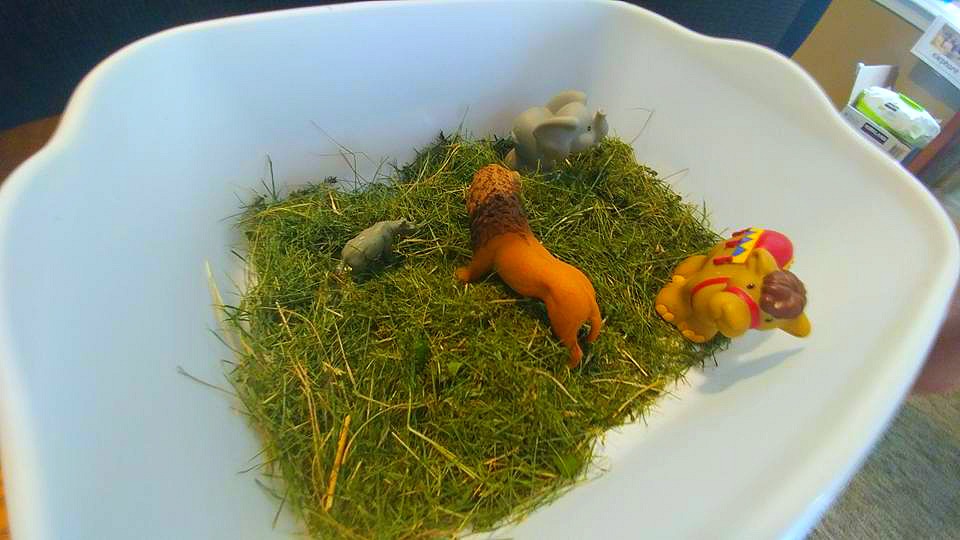 Lady Bug has been interested in Wild/African/Safari/Zoo animals lately so I decided to capitalize on her interest and have begun a morning time when we try to do an activity together while the boys do their vocabulary and math on the computer. A year ago a joint activity that was decided by anyone other than Lady Bug would have been a non starter. But now, with the help of her interest, I’m getting 10-15 minutes at a time!

Right now I’m using these activities as joint activity practice, spread out once a day. But they can be done with a younger child who’s interested in learning but isn’t up to a lot of fine motor things, or put several together for a day of zoo fun.

Because I’m hoping to eventually homeschool Lady Bug in a modified Montessori way, I start our joint activity time with the calendar board I got from Amazon. It has the date, season, time, weather, time of day, all adjustable and durable wood. I have it up on the wall held by Command Hooks. Lady Bug didn’t seem that interested in it at first, but she has gone from completely ignoring it to saying the numbers on the board and watching me change the date and the time. Which is awesome.

After a minute on the calendar I read a poem two times that I found here. Lady Bug loves the poem and the arm motions (different than suggested on the poem) to go along with them. At first she just smiled and watched me be silly with the movements I chose. After two weeks she started scripting some of the lines, and she mirrors some of the motions as I do them now.

After we’ve done those two things we try one new activity. You can do them in any order you want. Here’s a list of the things we either have done or plan to do:

That should hopefully be enough to fill three weeks of activities; more if the interest holds and you redo some of them. For more ideas like this (as well as other ideas that Lady Bug is interested in) I have a Pinterest board for them. I’d love to hear how it goes if you try it with your kiddo!

My only hope/goal for the entire month was to establish a routine of doing this. The Saturday after week 2 of doing this, Lady Bug went over to the calendar by herself and started saying numbers! So we did calendar time. Then I was talking to husband that I needed to find the poem. She heard me and started trying to say lines from the poem! I’d say that counts as routine established!

I also decorated her learning area with zoo signs I printed off of Google and some old animal wall decals I had from when Early Bird was going through a similar phase.