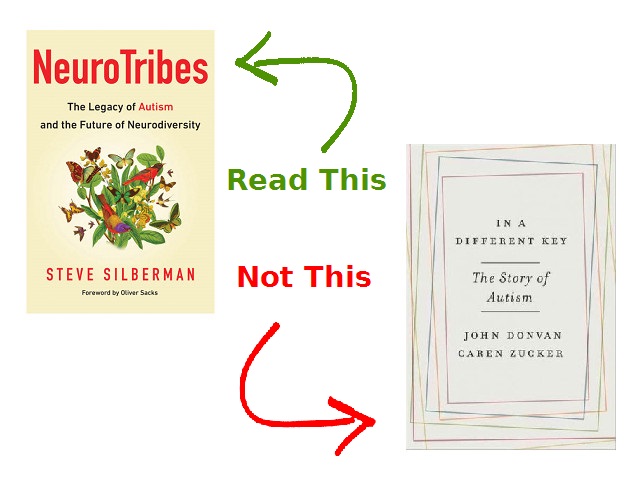 I tried to go into reading In A Different Key as impartially as I could. I had heard a few general negative comments, but nothing specific and I was determined to make up my own mind about it. Well, I read that whole 500+ book over the course of two weeks, taking notes as I went along. I am no longer impartial about this book.

Both of these books, NeuroTribes (NT) by Steve Silberman and In A Different Key (IADK) by John Donvan and Caren Zucker, attempt to present the history of autism, the gradual and growing understanding of it, and the significant events and attitudes and people who have contributed to the history of autism. Both books came out within a few months of each other, NT in August 2015 and IADK in January 2016. Having read both, you can tell that at times they used the same source material, which made it interesting to see the different ways the same information was presented. I think it is important to note that that NT‘s Steve Silberman came into the project with no firsthand experience with autism. He heard about a higher concentration of autistic kids in the Silicon Valley, was intrigued, did some research and wrote an article about it, then based on the response to the article started doing even more research and wrote the book. On the other hand, IADK‘s authors both have family members who are autistic; John Donvan has a high support needs brother in law, and Caren Zucker is the mother of an autistic. Silberman approached the information as an outsider with no bias; Donvan and Zucker researched with an opinion already formed. This is clearly evident in the way the two books are written.

NeuroTribes begins with the story of Henry Cavendish, known as the Man Who Weighed the Earth. The whole first chapter is dedicated to describing his most likely autistic life in the 1700’s, as well as other famous scientists and mathematicians like him who also were likely on the spectrum. The message is clear: people have been on the spectrum and part of the population, and contributing to society and advancements, for a long time. In A Different Key‘s very first section is titled “Autism’s First Child: 1930s -1960s.” Implying that Donald Triplett is the very first person ever to be autistic. They continue with that for a while, only on page 42 do they finally allow that there may have been autistic people before Donald. Their examples are based on the “Holy Fools” of Russia , a guy who walked around naked in the dead of winter oblivious to the cold, and the theory that potential autistics were probably burned at the stake as witches. This is not the only time where the authors of IADK give a certain impression or implication with a lot of information supporting that thought or theme, only to contradict it and say the opposite several chapters later. Are they hoping the book is so long that readers will forget the previous parts and not notice the contradiction? The negative and derogatory examples of the possibility of autistics before it’s “discovery” by Leo Kanner is just one example of how the authors of IADK almost exclusively present autistics in the worst possible light.

NeuroTribes is written with respect. Respect for the reader and respect for the dignity and autonomy of the autistic community.  The respect for the reader shows in the way the author presents the facts and allows the reader to come to their own conclusion. This has been criticized by some who feel like Silberman should have condemned certain things done to autistics in the past, instead of neutrally just reporting the facts and letting the reader decide that shocking kids if they don’t hug you is awful. But after the heavy handed attempts at emotional manipulation in In A Different Key, I very much appreciate the respect shown to readers in NT. I did not realize how much I appreciated the way NT described autistics and their struggles until IADK‘s obsession with feces. There is mention of feces and the smearing of bodily fluids at least once for every 20 pages of the book. It is a constant theme in IADK. Either one of the authors has a fixation on poop, or they mention it so often for shook value and to promote disgust. Not necessarily because they want the reader to hate autistic people, but because they want the reader to feel sorry for the poor suffering parents. Because IADK is all about the parents.

While both books are presented as a History of Autism, it becomes clear that NeuroTribes is about autism and the actual people diagnosed as autistic, while In A Different Key is about the parents of autistics. Like IADK‘s use of person first language for autistics but co-opts the identity for the parents with the constant use of the term “Autism Parent,” the story of autism in IADK is constantly about the parents’ struggle and hardships and triumphs, rather than the perspective of the children who are the actual autistics. This is clear in both the parts of the same stories they chose to tell, and where they diverge. NT talks about the growth of autistic culture, pockets of American subculture in the 20th century that was a haven for unidentified, low support need autistics, and self advocacy of adult autistics is given more attention than parental advocacy, though they are both treated respectfully. IADK talks much more deeply about the poor beleaguered parents banding together to fight schools, the formation of many “Autism Parent” societies, and their desperate fundraising efforts for a cure. Over and over IADK makes the point that autism is clearly a disease; just look at how much poop there is! Look at how sub-normal they are! Why would any loving parent think anything otherwise?

Another way the two books differ is their presentation of the various historical major contributors to today’s understanding of autism. NeuroTribes gives more detailed histories and a look at what perspectives drove the main contributors, such as Kanner, Asperger, Rimland, and Lovaas, while In A Different Key is less detailed and mentions more people than NT. It would have been more interesting reading about the people I had not heard of before, if I had not by that point lost faith in the credibility and accuracy of the authors. For example, they say unequivocally in the beginning of the book that Kanner was the only person who was seeing autistic kids, and that it was not being seen anywhere else in the world. Asperger is not mention until the last 3rd of the book, even though he published his first paper describing the autistic children he had been working with in another part of the world, in the year before Kanner wrote his. The most time they devote to Asperger is to question whether he was a Nazi or not. They list several respectable people who researched and concluded that he was not a Nazi. Then they talk about one guy who thinks he was a Nazi. The authors admit that the Nazi Truther is not widely agreed with, but seem to imply that they agree with him. With intentional omissions and misinformation, it is difficult to know how much to credit what they say about people and information I had not heard about from other sources. Another example of this is the IADK‘s portrayal of Rimland. Of him the authors of IADK say, “Without a doubt, if the community of autism parents had been a church, they would have made Rimland their first saint.” He is mentioned throughout the book as the Ultimate example of an Autism Parent, without a single mention of his basically founding the biomed movement to “cure” autism with diet and supplements. He is praised for the parent societies and charities he founded or inspired, without any mention or hint of the fact that he was kicked off the board of the society he founded for trying to force all the parents to put their kids on a specific diet and supplements to “cure” them!

NeuroTribes professionally written, factual with clear statements. In A Different Key is full of “must have felt”s and “probably”s and suppositions/inferences on the part of the authors that is decidedly unprofessional. NT tries to help neurotypical people understand the autistic mind and personality; IADK sympathizes with the parents who murder their autistic children. NT is not all rainbows and sunshine, but is intentional about presenting all parts of the autism spectrum with respect. IADK is shit and misery and despair and all but says outright that Asperger’s should never have been linked with autism and “high functioning” people should have no say at all about what it’s like to be autistic. NT is better edited with clear meaning; IADK has terribly confusingly worded sentences like this one: “In most cases, children with autism die unexpectedly–overwhelmingly by drowning or by seizures.”

When I first read NeuroTribes I was inspired by information to read and learn more about the things it talked about. When I read the beginning of In A Different Key I was hit with such a feeling of disgust and misery that I wondered why anyone would want to actually continue reading it. How discouraging it must be to a parent new to learning about autism! There was such a negative and sinister feel to it that I had to take constant breaks, I could not focus on such a emotionally depressing take on the history of autism. If you have a martyr complex, then I suppose In A Different Key may appeal to you. If you have dignity and believe in the dignity of all people, including autistics, read NeuroTribes.

7 thoughts on “Book Comparison: NeuroTribes vs. In A Different Key”